How high should a ballet barre be?


The ballet barre has been used in ballet classes and practise since the 19th Century.  It not only has to be of a substantial, stable design but also must be a placed at a comfortable height.


The professional advice (confirmed by the National Dance Teachers Association, NDTA) is that the barre should be wall mounted at a height between 900mm – 1200mm (35” – 47”).   We have found that many of our clients choose a height of around 1150mm (45”), as this is the suggested height of a barre for exams by the Royal Academy of Dance.


The most versatile arrangement in catering for dancers of different heights is to have a double barre system.  Only two barre heights are needed for all barre work.  Again the advice is that the second barre should be set 200mm (8”) lower than the top barre.  This allows for children up to the age of 13, shorter dancers or those with limited extension.  At the Ballet Barre Company we devised a double bracket system to satisfy these two barre height requirements.


Don’t forget if you need any assistance or have a question, please ask us ?

If you didn’t manage to see the Royal Ballet’s Mayerling, read our review.
Adam Blyde, Dancer at Rambert 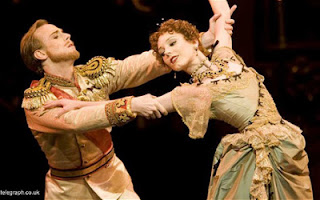 Our friend and dancer at the Rambert, Adam Blyde, has kindly reviewed The Royal Ballet's latest production of Mayerling. We are always thrilled to have Adam's unique view.

With most physical jobs, it is widely acknowledged that one can't go on forever, be it window cleaning, landscape gardening or bricklaying, there comes a moment when the body starts to reject the early mornings and the days just get too hard. However, most people can still spend a large part of their lives in those jobs. When it comes to dance, especially ballet, people tend to think that just as a dancer's career is taking off, the final curtain is on it's way down. Bleak, but true?.....

Apparently not. Leanne Benjamin, a principal dancer with the Royal Ballet, has just danced her last performance at the Royal Opera House after more than twenty years with the company. She is 49 years old. NOT that you'd ever know. Watching her onstage in Mayerling as Mary Vetsera, the young mistress of Crown Prince Rudolf, it's impossible to match that number to that body and ability. It's an impressive ballerina that convincingly loses 30 years onstage!

Mayerling is one of Sir Kenneth McMillan's most iconic works, the story of Crown Prince Rudolf of Austria-Hungary, brimming with political intrigue, scandal and scheming women. It's an epic journey over three acts for the lead role of Crown Prince Rudolf. Numerous difficult duets with countless
women, beautiful but technical solos, not much time offstage and a speedy descent into insanity and murder/suicide - all in all, a pretty tough night by most standards! Carlos Acosta was superb, handling everything with ease and assurance. But, it was when dancing with Benjamin that the stage really came to life.  I was close to the stage but still on the edge of my seat, fully absorbed in their tragic story.

It's inspiring to watch two dancers with such a strong connection be so fearless in their dancing. They were tense, violent, passionate, all-consuming lovers and being so sure in their technique and trust meant that we could go with them, and boy did we, to the edge of their despair.

Leanne Benjamin will be sorely missed on the London stage, a wonderful ballerina that I enjoyed watching all through my training. The irony of the evening was that I was sat in total agony after hurting my back during rehearsals. Sat in pain, watching a 49 year old dance as a 17 year old. With
ease and brilliance. I'm quite a few years younger than Ms. Benjamin so needless to say I was slightly ashamed of myself. Youth is obviously wasted on the young.... Anyone know a chiropractor?
Don't forget to follow us on facebook : www.facebook.com/theballetbarrecompany
The Team at The Ballet Barre Company

Posted by The Ballet Barre Company at 01:35 No comments: