Why not make a soup which keeps you fit and warms you up as well!

1.  pour 3 cups of water with your elbows
2.  slice 2 bunches of carrots with arms
3. throw in 4 handfuls of noodles with your knees
4. Stir with your hips
5. Toss with your toes
6. Boil with your body
7. And simmer with your shoulders
And enjoy!
Posted by The Ballet Barre Company at 06:03 No comments:

Email ThisBlogThis!Share to TwitterShare to FacebookShare to Pinterest
Labels: The Life of a Dancer

Judith Mackerell writes in the Guardian:


Edward Watson finds sympathy for the doomed prince while Sarah Lamb gives one of the performances of her career in MacMillan’s unsparingly brutal ballet.
Mayerling is surely the richest, if not the most popular of Kenneth MacMillan’s story ballets. Created in 1978, it looks and sounds like a conventionally mainstream work, with its swags of period costume and lush Liszt score. Yet as it voyages into an emotional wasteland of sex, psychosis and addiction, its choreography yields an unsparingly brutal account of human nature. There’s something in MacMillan’s portrait of the doomed Prince Rudolf, trapped within a cynical and loveless court, that makes me think of how Swan Lake might have played out had its hero been driven by a darker sexuality, and its librettist known something of Freud. 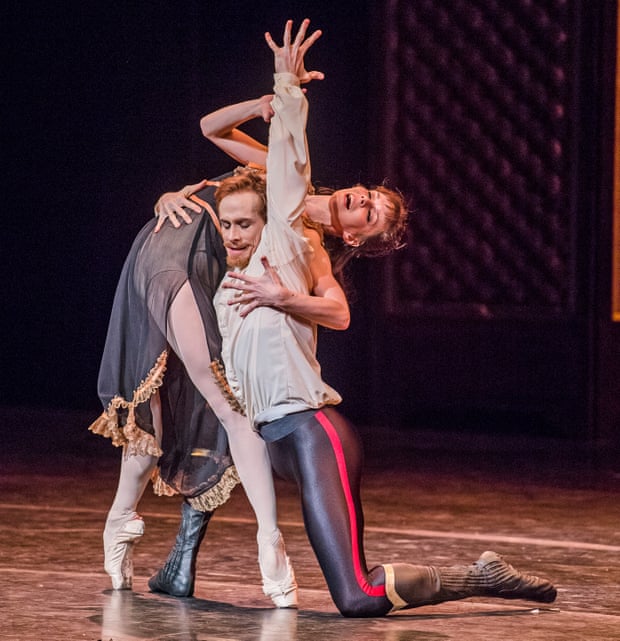 
The opening cast of this season’s revival handle the material superbly. Edward Watson finds true sympathy for Rudolf, a lost and damaged soul seeking solace in sex, drugs and the camaraderie of revolutionary politics. It’s a beautifully physicalised performance: the extreme flexibility of Watson’s line works freakishly well to suggest Rudolf’s unhinged personality and the tremor of his hands and twitchy shakes of his head register his deteriorating mental state.
Zenaida Yanowsky as the Empress Elisabeth reacts with exquisite nuance to Rudolf’s breakdown. As a royal mother, she’s both offended by her son’s behaviour and guilty at her own inadequacies, and Yanowsky is brilliant at making one quelling but troubled gesture speak volumes. The other women in Rudolf’s life are no less convincingly portrayed. Francesca Hayward, his innocent bride, dances with fearless abandon to convey the full force of Princess Stephanie’s panicked, furious response to the humiliation of her wedding night. Her confusion and disdain when she is forced to accompany Rudolf to a tavern are equally visceral, averting her gaze from the roistering whores, and nervously rubbing her gloved hands to erase the taint of her surroundings.

Sarah Lamb, gives one of the performances of her career as Rudolf’s ex-mistress, Countess Larisch. Her elegant, intelligent dancing is redolent of Larisch’s political and sexual pragmatism, but it also conveys deep, tremulous reserves of emotion as, resigned to her waning power over Rudolf, Larisch hands him on to the younger, fresher body of Mary Vetsera.
Vetsera is danced by Natalia Osipova, who characteristically seeks out the darkest extremes of the role. Her Vetsera is as much in thrall to the rank of her new lover as to the discovery of her own sexual power, and she invests her dancing with an almost distorted avidity as she throws herself into Rudolf’s embrace. During their first bedroom duet, Osipova is too much the erotic Maenad, not the teenage girl, but she becomes riveting in the final scene where Vetsera and Rudolf plot their double suicide and where, possessed by equal parts terror, adoration and self-importance, she seems to be burrowing her way into her lover’s soul. The two lovers become hypnotised by the romance of death. But MacMillan doesn’t flinch from showing that, unlike the lovers in Swan Lake, they can’t achieve poetic transcendence – only a squalid mess.